Is the era of reflection-heavy C# libraries at an end?

I’m going to talk about reflection-heavy libraries; I will describe the scenario I’m talking about - as it is commonly used today, the status quo, giving a brief overview of the pros and cons of this, and then present the case that times have changed, and with new language and runtime features: it may be time to challenge our way of thinking about this kind of library.

I’m a code-first kind of developer; I love the inner-loop experience of being able to tweak some C# types and immediately have everything work, and I hate having to mess in external DSLs or configuration files (protobuf/xml/json/yaml/etc). Over the last almost-two-decades, I’ve selected or written libraries that allow me to work that way. And, to be fair, this seems to be a pretty common way of working in .NET.

What this means in reality is that we tend to have libraries where a lot of magic happens at runtime, based either on the various <T> for generic APIs, or via GetType() on objects that are passed in. Consider the following examples:

I won’t try to give an exhaustive list, but there are a myriad of libraries - both by Microsoft, or 3rd-party, for a myriad of purposes, that fundamentally fall into the camp of:

At runtime, given some Type: check the local library type cache; if we haven’t seen that Type before: perform a ton of reflection code to understand the model, produce a strategy to implement the library features on that model, and then expose some simplified API that invokes that strategy.

Behind the scenes, this might be “simple” naive reflection (PropertyInfo.GetValue(), etc), or it might use the Expression API or the ref-emit API (mainly: ILGenerator) to write runtime methods directly, or it might generate C# that it then runs through the compiler (XmlSerializer used to work this way, and may well still do so).

This provides a pretty reasonable experience for the consumer; their code just works, and - sure, the library does a lot of work behind the scenes, but the library authors usually invest a decent amount of time into trying to minimize that so you aren’t paying the reflection costs every time.

So what is the problem?

For many cases: this is fine - we’ve certainly lived well-enough with it for the last however-many years; but: times change. In particular, a few things have become increasingly significant in the last few years:

There is a different way we can do all of this

Everything above is a side-effect of the tools that have been available to us - when the only tool you’ve had for years has been a hammer, you get used to thinking in terms of nails. For “code first”, that really meant “reflection”, which meant “runtime”. Reflection-based library authors aren’t ignorant of these problems, and for a long time now have been talking to the framework and language teams about options. As the above problem scenarios have become increasingly important, we’ve recently been graced with new features in Roslyn (the C# / VB compiler engine), i.e. “generators”. So: what are generators?

Imagine you could take your reflection-based analysis code, and inject it way earlier - in the build pipe, so when your library consumer is building their code (whether they’re using Visual Studio, or dotnet build or whatever else), you get given the compiler’s view of the code (the types, the methods, etc), and at that point you had the chance to add your own code (note: purely additive - you aren’t allowed to change the existing code), and have our additional code included in the build. That: would be a generator. This solves most of the problems we’ve discussed:

If you’re thinking “this sounds great!”, you’d be right. It is a huge step towards addressing the problems described above.

What does a generator look like for a consumer?

From the “I’m an application developer, just make things work for me” perspective, using a generator firstly means adding a build-time package; for example, to add DapperAOT (which is purely experimental at this point, don’t get too excited), we would add (to our csproj):

This package isn’t part of what gets shipped in our application - it just gets hooked into the build pipe. Then we need to follow the library’s instructions on what is needed! In many cases, I would expect the library to self-discover scenarios where it needs to get involved, but as with any library, there might be special methods we need to call, or attributes we need to add, to make the magic happen. For example, with DapperAOT I’m thinking of having the consumer declare their intent via partial methods in a partial type:

If you haven’t seen this partial usage before, this is an “extended partial method” in C# 9, which basically means partial methods can now be accessible, have return values, out parameters, etc - the caveat is that somewhere the compiler expects to find another matching half of the partial method that provides an implementation. Our generator can detect the above dangling partial method, and add the implementation in the generated code. This generated code is then available in the IDE, either by stepping into the code as usual, or in the solution explorer: 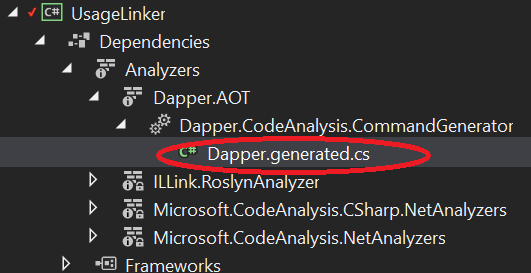 and as a code file: 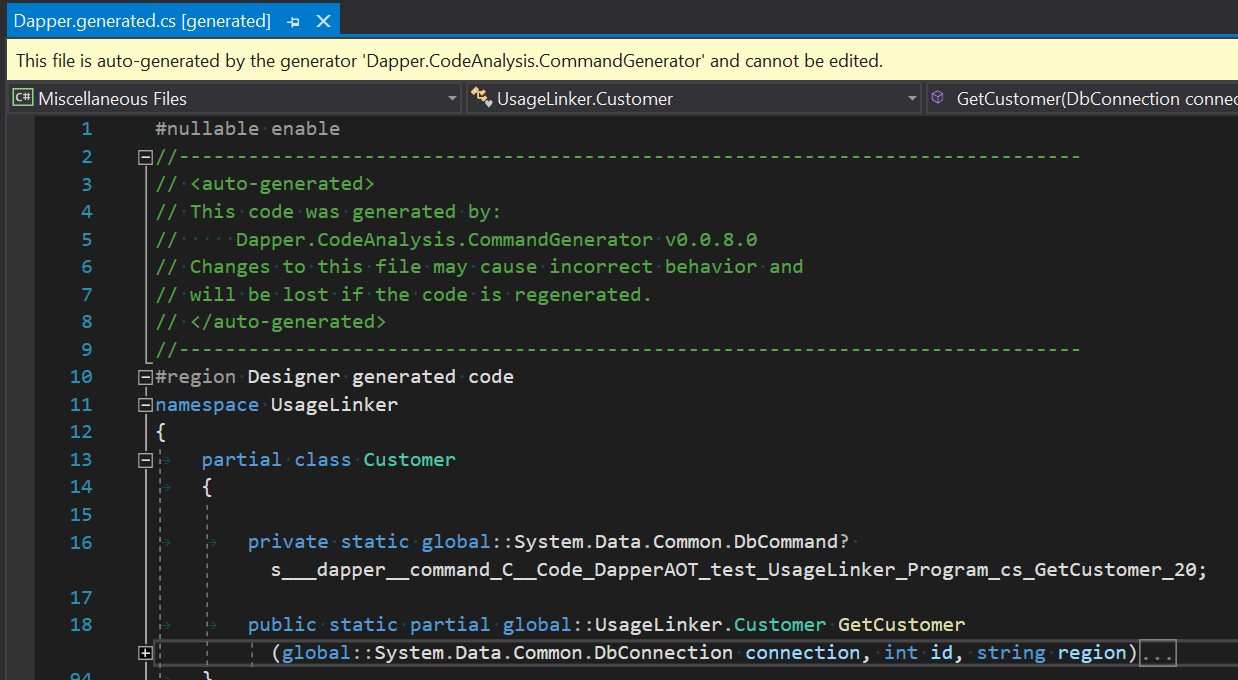 Other libraries may choose other approaches, perhaps using module initializers to register some specific type handlers into a lightweight library, that handle expected known types (as discovered during build); or it could detect API calls that don’t resolve, and add them (either via partial types, or extension methods) - like a custom dynamic type, but where the convention-based APIs are very real, but generated automatically during build. But the theme remains: from the consumer perspective, everything just works, and is now more discoverable.

What does a generator look like for a library author?

Things are a little more complicated for the library author; the Roslyn semantic tree is similar to the kind of model you get at runtime - but it isn’t the same model; in particular, you’re not working with Type any more, you’re working with ITypeSymbol or (perhaps more commonly) INamedTypeSymbol. That’s because the type system that you’re inspecting is not the same as the type system that you’re running on - it could be for an entirely different framework, for example. But if you’re already used to complex reflection analysis, most things are pretty obvious. It isn’t very hard, honest. Mostly, this involves:

I’m not going to give a full lesson on “how to write a generator” - I’m mostly trying to set the scene for why you might want to consider this, but there is a Source Generators Cookbook that covers a lot, or I humbly submit that the DapperAOT code might be interesting (I am not suggesting that it does everything the best way, but: it kinda works, and shows input-source-file-based unit testing etc).

This all sounds too good to be true? What is the catch?

Nothing is free. There’s a few gotchas here.

That said, there’s also some great upsides - during build we have access to information that doesn’t exist in the reflection model, for example the name parts of value-tuples (which are exposed outwards via attributes, but not inwards; libraries are inwards, from this perspective), and more reliable nullability annotation data when calling generic APIs with nullability.

I genuinely think we should be embracing generators and reducing or removing completely our reliance on runtime reflection emit code. I say this as someone who has built a pretty successful niche as an expert in those areas, and would have to start again with the new tools - I see the benefits, despite the work and wrinkles. Not only that, I think there is an opportunity here (with things like “extended partial methods” etc) to make our application code even more expressive, rather than having than having to worry about dancing around library implementation details.

But I welcome competing thoughts!